Film Taken From You Tube 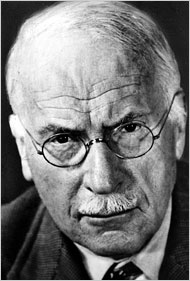 Carl Jung founded the field of analytical psychology and, along withSigmund Freud, was responsible for popularizing the idea that a person’s interior life merited not just attention but dedicated exploration – a notion that has since propelled tens of millions of people into psychotherapy.

Whether or not he would have wanted it this way, Jung – who regarded himself as a scientist – is today remembered more as a countercultural icon, a proponent of spirituality outside religion and the ultimate champion of dreamers and seekers everywhere, which has earned him both posthumous respect and posthumous ridicule. Jung’s ideas laid the foundation for the widely used Myers-Briggs personality test and influenced the creation of Alcoholics Anonymous. His central tenets – the existence of a collective unconscious and the power of archetypes – have seeped into the larger domain of New Age thinking while remaining more at the fringes of mainstream psychology.

In October 2009, a book that Jung secretly wrote is to be published by W. W. Norton.  “The Red Book” describes his self-analysis and became the genesis for the Jungian method. The book, which spent the last quarter century in a bank vault in Switzerland, is billed as the “most influential unpublished work in the history of psychology.” The original book, bound in red leather, will be on display for several months at the Rubin Museum of Art in Manhattan.

Jungian analysis revolves largely around writing down your dreams (or drawing them) and bringing them to the analyst – someone who is patently good with both symbols and people – to be scoured for personal and archetypal meaning. Borrowing from Jung’s own experiences, analysts often encourage clients to experiment on their own with active imagination, to summon a waking dreamscape and to interact with whatever, or whoever, surfaces there. In its purist form, a Jungian analyst eschews clinical talk of diagnoses and recovery in favor of broader (and some might say fuzzier) goals of self-discovery and wholeness – a maturation process Jung himself referred to as “individuation.” Perhaps as a result, Jungian analysis has a distinct appeal to people in midlife.

A big man with wire-rimmed glasses, a booming laugh and a penchant for the experimental, Jung was interested in the psychological aspects of séances, of astrology, of witchcraft. He could be jocular and also impatient. He was a dynamic speaker, an empathic listener. He had a famously magnetic appeal with women. Working at Zurich’s Burghölzli psychiatric hospital, Jung listened intently to the ravings of schizophrenics, believing they held clues to both personal and universal truths. At home, in his spare time, he pored over Dante, Goethe, Swedenborg and Nietzsche. He began to study mythology and world cultures, applying what he learned to the live feed from the unconscious – claiming that dreams offered a rich and symbolic narrative coming from the depths of the psyche. Somewhere along the way, he started to view the human soul – not just the mind and the body – as requiring specific care and development, an idea that pushed him into a province long occupied by poets and priests but not so much by medical doctors and empirical scientists.

Jung soon found himself in opposition not just to Freud but also to most of his field, the psychiatrists who constituted the dominant culture at the time, speaking the clinical language of symptom and diagnosis behind the deadbolts of asylum wards. Separation was not easy. As his convictions began to crystallize, Jung, who was at that point an outwardly successful and ambitious man with a young family, a thriving private practice and a big, elegant house on the shores of Lake Zurich, felt his own psyche starting to teeter and slide, until finally he was dumped into what would become a life-altering crisis.

What happened next to Carl Jung has become, among Jungians and other scholars, the topic of enduring legend and controversy. It has been characterized variously as a creative illness, a descent into the underworld, a bout with insanity, a narcissistic self-deification, a transcendence, a midlife breakdown and an inner disturbance mirroring the upheaval of World War I. Whatever the case, in 1913, Jung, who was then 38, got lost in the soup of his own psyche. He was haunted by troubling visions and heard inner voices. Grappling with the horror of some of what he saw, he worried in moments that he was, in his own words, “menaced by a psychosis” or “doing a schizophrenia.”

He later would compare this period of his life – this “confrontation with the unconscious,” as he called it – to a mescaline experiment. He described his visions as coming in an “incessant stream.” He likened them to rocks falling on his head, to thunderstorms, to molten lava. “I often had to cling to the table,” he recalled, “so as not to fall apart.”

As a psychiatrist, and one with a decidedly maverick streak, he tried to tear down the wall between his rational self and his psyche. For about six years, Jung worked to prevent his conscious mind from blocking out what his unconscious mind wanted to show him. Between appointments with patients, after dinner with his wife and children, whenever there was a spare hour or two, Jung sat in a book-lined office on the second floor of his home and actually induced hallucinations – what he called “active imaginations.”

First taking notes in a series of small, black journals, he then expounded upon and analyzed his fantasies, writing in a regal, prophetic tone in the big red-leather book.

What he wrote did not belong to his previous canon of dispassionate, academic essays on psychiatry. Nor was it a straightforward diary. It did not mention his wife, or his children, or his colleagues, nor for that matter did it use any psychiatric language at all. Instead, the book was a kind of phantasmagoric morality play, driven by Jung’s own wish not just to chart a course out of the mangrove swamp of his inner world but also to take some of its riches with him. It was this last part – the idea that a person might move beneficially between the poles of the rational and irrational, the light and the dark, the conscious and the unconscious – that provided the germ for his later work and for what analytical psychology would become.

He worked on the Red Book on and off for about 16 years, but he never managed to finish it. He actively fretted over it, wondering whether to have it published and face ridicule from his scientifically oriented peers or to put it in a drawer and forget it. Regarding the significance of what the book contained, however, Jung was unequivocal. “All my works, all my creative activity,” he would recall later, “has come from those initial fantasies and dreams.”

Jung, who was born on July 26, 1875 in the mountain village of Kesswil, was a lifelong outsider in Zurich, even as in his adult years he seeded the city with his followers and became – along with Paul Klee and Karl Barth – one of the best-known Swiss men of his era. Perhaps his marginalization stemmed in part from the offbeat nature of his ideas. (He was mocked, for example, for publishing a book in the late 1950s that examined the psychological phenomenon of flying saucers.) Maybe it was his well-documented abrasiveness toward people he found uninteresting. Or maybe it was connected to the fact that he broke with the established ranks of his profession. (During the troubled period when he began writing the Red Book, Jung resigned from his position at Burghölzli, never to return.) Most likely, too, it had something to do with the unconventional, unhidden, 40-something-year affair he conducted with a shy but intellectually forbidding woman named Toni Wolff, one of Jung’s former analysands who went on to become an analyst as well as Jung’s close professional collaborator and a frequent, if not fully welcome, fixture at the Jung family dinner table. He died on June 6, 1961.